At the Hang Dong Big-C south of the Airport take a left on the ring road.  Just before the river Ping bridge take the a left off of the ring road.
Turn right (south) on the river road at the three way intersection. Drive south for one kilometer.
After the 7-11 (on the right) where the river bends to the left, go straight through the small four way intersection (Don't follow the river road)
Stay on this road for 400 meters, it will turn left and then right. You will come to a small bridge at a four way intersection where you will see a two story green building in front of you.
eSTAR Foundation is across the street from the green building.
Go straight at this intersection for about 50 meters. (Don't turn left at the small  three way intersection - keep right)
The gate to our parking lot is on your right in the back of the building. 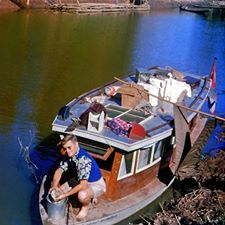 The eSTAR Foundation was started by Dwight & Mary Kay Martin in August of 2007. Its origin, however, can actually be traced to 1948, when Dwight’s parents came to Thailand and were the first Protestant missionaries in Nakorn Phanom province. Dwight was born when his parents served in this remote province on the Mekong River and is where he would develop a connection with Thailand and its people.  Dwight has dual Thai-US citizenship.

After high school, Dwight left Thailand to attend college in the US. He married Mary Kay, started a business career, raised a family and received an MBA in Technology Management. Eventually, he cofounded a successful software company. Though away from Thailand for many years, he never forgot the place where he had grown up and, as had his parents, began to sense God’s call to serve the Thai people. In 2006 he and Mary Kay moved to Thailand.

The Martins quickly connected with the leaders of  the Thai church due to Dwight already having a personal knowledge of the language and culture. He was able to establish some key relationships with leaders who had been impacted by his parents’ ministry. As a result these church leaders asked Dwight to join them to maintaining the statistics on the church in Thailand. Many other ministry projects requiring the business and technical skills he possessed soon followed.